The below graphs of Global Temperature is produced with NOAA station data and NOAA Software GHCNM-v3.3.0 running on our server. Land surface temperatures are available from the Global Historical Climate Network-Monthly (GHCN-M). This will be automatically updated the 9th of Each month. Available on the 10th of the month.

Greenhouse gases like all gases diffuse until they are equal distant apart so they can’t cause this type of warming.  Any freshman college chemistry student knows this. Also these and all gases get distributed throughout the earth by winds.  I hope to work with Oregon State University Chemical, Biological and Environmental Engineering Professor of Transport II HEAT CHE 332 soon to determine how much of this heat is caused by GHG.

It’s no wonder a large percentage of scientists on the climate deniers list online are Astrophysics Ph D’s.

The shift of the earths tilt in the year 2000-2004 has the following effect of temperature rise by latitude. You can see this effect in individual graphs on the Graphs page. This shift is described by NASA JPL scientists as massive.

The first astrophysical event was in 1975. This effect is 1.0 C rise at the north pole.

You can see all the NOAA Graphs here. NOAA Data Station Graphs by Latitude
You can get these graphs direct from NOAA here:

The script we made to create the graphs has been confirmed by NOAA to be correct.  The link below will allow anyone with access to a Unix server to install the NOAA software and create these graphs.
Graph Script

The graph below is NOAA data station temperature change by latitude with March 2019 data and before. 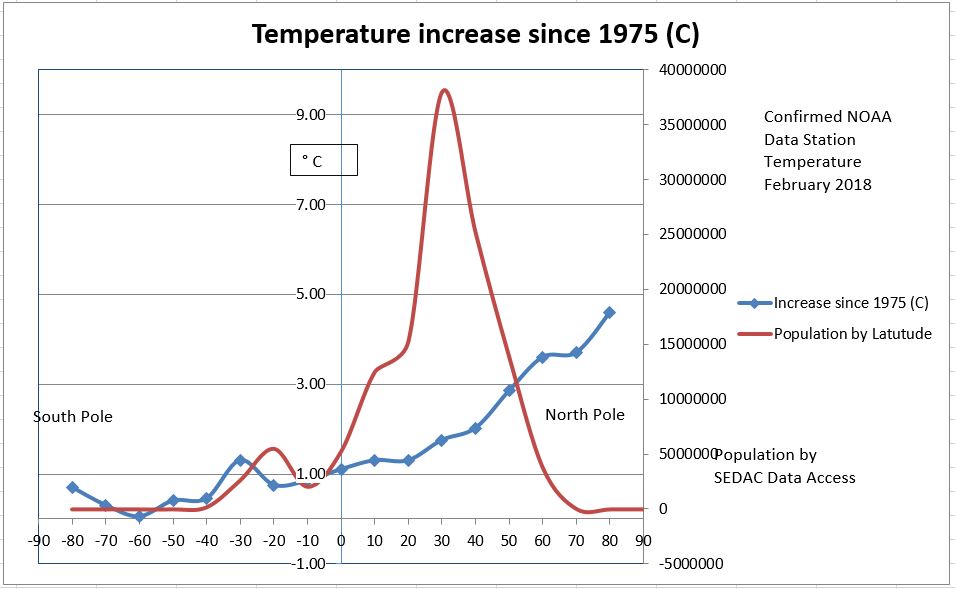 Very little signature to temperature. The rise of carbon dioxide by latitude is only 2.5%. This data is courtesy of Pieter Tans

I went to a small conference on 9/19/2017 7 pm at the Portland Oregon Airport Sheraton Hotel. This was sponsored by the John Birch Society.  They brought in a 30 year veteran reporter of all things United Nations. In the PowerPoint presentation he showed us many things the U.N. would not want anyone to know.  Including a page from a 1980’s manuscript that showed The U.N. knew some astrophysical happened in the 1970’s to cause warming mostly in the northern hemisphere and decided to call it global warming as an experiment to control people. Global warming, climate Change and Agenda 21 are all from a deceitful United nations and about social engineering.